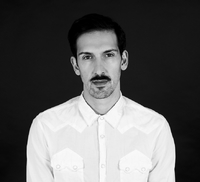 BayDance: You've said that American choreographer Agnes DeMille is your guiding light. How so?

Arthur Pita: She's one of them. I was very influenced by her dream ballet in the musical Oklahoma.

BD: You grew up in South Africa, which has a rich ballet tradition. Recently, I interviewed South African students at the New Ballet School in San Jose who said that the South African mindset pushes ballet technique hard in the Russian Vaganova style. That seems to be the opposite of your open-ended, surreal style. Do you recognize South African style in your work?

AP: Yeah. I think we're influenced by everything. I got into ballet relatively late. I was told by a ballet teacher, who was quite harsh, that I would never be a prince, which was lucky because I didn't want to be a prince. But I had an amazing, an amazing dance teacher, named Sonje Mayo. She was actually one of the few white people from South Africa who actually danced a little bit for Alvin Ailey II. I think one of the first white people to be in Alvin Ailey. She really had a massive influence on me. She taught me about the world of dance and what it was. I think she was a big influence on a lot of people. I think South Africans are definitely hardworking, absolutely, and I think I definitely have that ethic.

BD: The San Francisco Ballet web site describes your Björk Ballet as "a surrealist dream ballet." Why surrealism? Why dreams?

AP: Interesting. I like to think that you have to be realistic, and somehow creating the surreal within the real. I think that if you were creating within absurdity, it wouldn't make sense. So it becomes an abstract work of the real. I think some of the ideas we are attracted to, because they are absurd, they invite themselves to reality very easily. Dream sequences are a thing I do, called a dream object. It feels dreamlike, and we don't quite know why we get it, but we get it.

BD: That sounds like Fellini's movies, that surreal dream language. You've often been compared to David Lynch, who's been labelled a "popular surrealist". Your work also reminds me of the Theatre of the Absurd playwrights, Ionesco, Becket, Edward Albee, and so on, where people are sometimes influenced by other forces that they cannot control, or they don't really know what's going on. Do you agree with that?

AP: Yeah! Absolutely. I absolutely have been influenced by David Lynch. His style is so innovative it's created a new word—"Lynchean". I've watched all episodes of his second Twin Peaks series. I think you can see that David Lynch is himself inspired by Fellini. You can see Fellini in Lynch. It's all a big melting pot. As an artist I have to be influenced by who I can. So I've absolutely learned from all these people, like Beckett and Lynch, you know, and Fellini. These are people teaching wonderful lessons. Not really about good and evil forces, just dream state and reality state, interconnected.

BD: Like Björk, you seem to defy being classified into a genre. The San Francisco Chronicle described Björk's 1994 Post album as "genre roulette". I saw an example of that at Björk's 1993 Los Angeles concert. It attracted the most diverse concert audience I've ever seen; all kinds of people. You have a very varied background that includes ballet training and disco, for example, which you applied very successfully in the movie Ex Machina. Do you see yourself as unclassifiable, as a pan-genre artist?

AP: Yeah. I think I include everything I've had the privilege of working on, an absolute privilege. The Metamorphosis, for example, is such a different place to Björk Ballet, and even though they might be seen as absolutely having nothing in common there, you know, you get such a different space, the function of the space works so differently. And I really do enjoy that. So, with Björk Ballet I particularly enjoyed the freedom of working with the electric currents of Björk's music. Her music is so theatrical, her lyrics have a sort of openness at the heart. It's completely open. She's like an open vessel, which is very, very powerful. I think that really comes out in her music.

BD: Aren't there some traditional Icelandic influences in her music as well as the electronic dance scene?

AP: There's an influence of Icelandic tradition of storytelling that comes out in her music. Iceland has also influenced her use of technology. When technology first came to Iceland, there was some resistance to it, that it was a kind of evil, that TV and computers were bad and that people can live without these things. So Björk, being kind of punk, she immediately incorporated technology. I don't think Björk is just her music. She's a whole thing. She's about what she wears. She's about what she does. And there's always the two themes of nature and technology, and she puts them together.

BD: In a San Francisco Ballet online video about Unbound, you mention that Björk is a whole universe, like Planet Björk, and that her music will help the dancers, "unleash their Unbound spirit".

BD: And that you want to get this sense of nature, this Adam and Eve kind of nature and technology. A recurring theme in Björk's music is a balance between organic and synthetic elements, the influence from electronic dance music, such as art pop, acid house, and trip hop.

AP: When she left Iceland and came to London, she had only seen a few foreign bands perform in Iceland. She had performed in some punk bands, like the Sugarcubes, in Iceland. When she came to London, she attended a lot of gigs that were quite rocky, and so she got bored very quickly. So she got into things like acid house and things happening along that way. That was the trigger for her. That's when she got started heading in that direction of synthetic, computerized music. I saw her in an interview where she said whatever the instrument is, you have to put your soul into it or the sound won't have any soul. So even with technology, she believes in putting her soul into it so her soul comes out to make a human connection.

BD: What dream quality of Björk's music did you choose to choreograph in Björk Ballet? Is this a happy dream?

AP: There are a lot of different elements. There's a masked character, like the stage mask for tragedy. And then you have the comedy. The sad face and the happy face. And there is a character, a sad-face character that goes fishing. He goes fishing for the happy face. He's fishing for his happiness. It all ties in to Björk's Anchor song, from her first album, the Debut album. When I listen to that song, it's quite profound. The lyrics are so interesting, in a way, because you can interpret that song in so many different ways. That creature who lives in the sea, that's possibly a suicide or some kind of love letter. It has a dark edge, a little bit, but I'm juxtapositioning it.

BD: In San Francisco Ballet web site's Unbound section, there's a dance to Björk's song Vokuro, from her Medulla album. It's an old Icelandic lullabye sung in Icelandic. We'd have to ask Helgi Tomasson to translate it for us.

AP: (laughing) That's right! It's a very beautiful melody. It's about the land and about the sea. Maria Kochetkova will be doing a solo to that.

BD: Did you have any particular San Francisco Ballet dancers in mind to dance to Björk's songs?

AP: The way it worked, the company was broken up into three groups, and you were basically given a group to work with. It's meaningful because that's who you've been given. I just really happen to have such a fantastic cast. It's actually very easy for me to distribute all the featured moments among this group.

BD: What experience would you like audiences to take with them from Björk Ballet?

AP: Interesting. (pauses a moment) I'd like them to have a profound, upbeat, meaningful, musical trip. I'd like them to be surprised at how accessible the music is and how it fills the theatrical space.

BD: It seems that you and Björk are on the same creative wavelength. Do you envision a future collaboration with her?

AP: I can only dream.