The 100th anniversary of the birth of choreographer Merce Cunningham has inspired many events to celebrate his work. Director Alla Kovgan's 93-minute documentary Cunningham brings together his dances with archival footage and audio of Cunningham, from 1942 to 1972, into an aesthetic collage with 3D touches. Kovgan wrote and directed the film with assistance from former members of the Merce Cunningham Dance Company Jennifer Goggans and Robert Swinston, as well as other former Cunningham dancers. The film is scheduled for release in the Bay Area in January 2020. 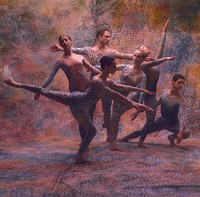 Much of the footage has never been shown before. Two-thirds of the film includes excerpts from fourteen dances, with each dance communicating an original Cunningham idea. Sequences were adapted for 3D at "iconic" locations. Kovgan has applied 3D technology in creative ways, such as separating foregrounds from backgrounds. There is no narration; all the stories in the film are told through archival recordings of Cunningham, his early collaborators the musician John Cage and visual artist Robert Rauschenberg. Cunningham's dancers give insightful comments, such as, "Merce is a painter, and we are colors." Multiple recordings of Cunningham's interviews with journalists provide meaningful accompaniment to visual scenes.

"This project started not from archives," says Kovgan, "but from my interest in 3D and trying to translate Merce's ideas into cinema. But as I was figuring out how to do that from his work, I got interested in that particular period, between 1942 to 1972, his first thirty years in New York, from when he was not a famous choreographer, but sort of a struggling dancer trying to figure out what he's there to do."

She also realized that many people today only think of Merce Cunningham as an old man. "Very few living people remember him and how he danced when he was young," Kovgan says, "I felt that there must be material, some footage of him dancing. So I started digging." 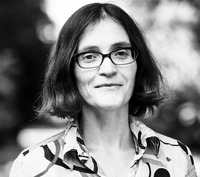 Kovgan had access to all of the Merce Cunningham Trust material, but her research was made easier and more productive by the man to whom she has dedicated this film-dance archivist David Vaughan. "He actually wrote on index cards," says Kovgan in amazement, "every single performance, every single recording, every single event that happened with the company. He believed in my project so much that he let me see all this material."

As she went through Vaughan's records she realized there were recorded events that most people knew little or nothing about. "There were recordings of rehearsals and hundreds of recordings of the same piece," says Kovgan, "So much material!" But there was little material about the early years of Cunningham's career, so Kovgan "started digging" for it.

Having worked as an editor she knew how to work with archival material. "I also know you don't take no for an answer from the archives", she says wryly. Among Vaughn's index cards she found a record of a dance filmed at the NDR studio in Germany in 1957, but when she contacted NDR they said they didn't have the film. "I know that archives always have unclassified, uncategorized material, usually by year," says Kovgan. So she "pushed them" to try to find the film among their unidentified material for that year. "And they found a dance that was lost for fifty years, called Changeling."

Incredibly, Kovgan's research had discovered a film of a dance Cunningham created in 1957 and had last performed in 1964. Long assumed lost, it was known that the costumes were designed by Robert Rauschenberg and the music was by Christian Wolff, but there was no known record of the choreography. The discovery made international news. "Nobody had looked at it for fifty years," says Kovgan, "You see him very young dancing."

Kovgan's interest in Cunningham extends to his place as part of the Avant-garde era in New York. "So there's this incredible era of American Avant-garde cinema that came out with Stan Brakhage and a lot of other people," she says. Cunningham worked with film maker Stan Vanderbeek in 1966 on a piece called Variations V. "It included background screens and sort of like a choreography of dance and projections, and sounds, and all kinds of things" she says, "So I figured Vanderbeek must have shot him somewhere." Kovgan contacted the Stan Vanderbeek estate, and "They were incredibly generous," she says. Among the three hundred films by Vanderbeek at MOMA, Kovgan discovered matereial that nobody had seen before, scenes by Stan Vanderbeek of Merce Cunningham in his studio. "So there's shots of feet and hands that nobody had seen, she says."

Film maker Frederick Wiseman, in a 2009 interview with BayDance.com, compared film making to choreography when he puts all the scenes together. Does Kovgan see film making like choreography? "I love Fred Wiseman," she says, "and it's a great question. I was an editor for over fifteen years, so I had to go through that process so many times with documentaries, sort of choreographing the structure. In this particular film, a lot of choreography had to happen while we were shooting. Because we deal with 3D, and 3D is really best when you have long, choreographed shots. It's not very good when you cut fast, your eyes disturbed, and it completely undermines the experience. So we had to choreograph through the viewer's eye. I didn't want to choreograph a film like a Merce Cunningham dance, which is like fourteen people going in different directions and you can't make a single shot."

Kovgan and the film's choreographers, Robert Swinton and Jennifer Goggans, looked at eighty of Cunningham's works. "You as a filmmaker have to become a choreographer of the camera," she says, "in a sense, because you have to choreograph for the viewer's eye and figure out for each particular second what it is that gives you a scene. So we went through this incredibly excruciating process." They found that some of the dances were very well documented, and some were not. It was a long process of deciding which dances they wanted to include.

So where to begin? Despite Cunningham's remark in the film that "The dance does not refer," Kovgan says that, "Merce always started with a physical question with every dance." She and the choreographers identified Cunningham's idea behind each dance, then Kovgan tried to think about how cinema would present those ideas. Kovgan recalls, "For instance Winterbranch is based on an action of falling, how would cinema do that? We had to actually choreograph our camera, constantly figuring out what the viewer sees. So the choreographic process happened even before we went to the locations to shoot."

The reconstructed scenes were shot knowing ahead of time how they would be cut. "The choreographic process was much more at the level of preparation," Kovgan says, "But when we had to weave all these elements together, the archive and live action footage, that's where Fred Wiseman comes in. That's where we go through the process of choreography, we had all of these pieces and we had to assemble them together. So we had to do both, what Fred Wiseman said he does in the post-production process, but also when we were shooting.

The movie portrays Cunningham's struggle to succeed, and Kovgan's other films Nora and My Perestroika are about overcoming hardship. What motivates Kovgan to document peoples' struggles? "It's a beautiful question. I guess as filmmakers we are all looking for soulmates...It's very difficult to be driven to make things. The daily grind of it is quite amazing. It's an incredibly lonely process, a struggle. ...So I think the thing with Merce is that it's never easy. ... All those people I make films about, they're quite brave even though they don't think of themselves like that."

Kovgan is currently planning a feature film, "that comments on the elitism of the high art world and the vulgarity of the pop art world and celebrates some virtues that both worlds have... I think there's a best of both worlds, but there's only one stage to stand on. The choreographer I'm working with now has the ability to stand there." But Kovgan will not say who the choreographer is. "Not yet, but soon. It has to go step by step."